Bloomberg writer Marcy Nicholson reported this week that, “Canada, the world’s biggest canola grower and a major wheat producer, forecasts a 26% drop in supplies of its main crops as drought ravages output and inventories shrink.

Grain and oilseed exports are expected to fall in the marketing year that started Aug. 1 for most crops, and inventories will drop due to low supplies, Agriculture and Agri-Food Canada said in a monthly report on Thursday. By the end of July, nearly three quarters of Canada’s agricultural area was abnormally dry or in a drought.

The Bloomberg article explained that, “Erratic weather globally is helping push prices of staple crops including wheat to multiyear highs. The outlook for the sharp drop in Canadian supplies also comes with a forecast for the nation’s grain prices to remain high at a time that food inflation is already being felt in consumers’ wallets.”

And in the U.S., Tom Lutey reported yesterday at The Billings Gazette Online that, “Extreme drought and grasshoppers have taken a toll on Montana grains with harvest down by as much as half from a year ago.

“The state, which normally ranks third in the nation for wheat production, has suffered steep declines in yield as nearly 99% of Montana is in severe to exceptional drought in the final weeks of harvest.

“‘Yield-wise, it will be our worse year since 1988,’ said Cassidy Marn, Montana Wheat and Barley Committee executive vice president, referencing a year that’s been repeatedly uttered by Montana producers.”

Mr. Lutey noted that, “In many of Montana’s best wheat growing areas, grasshoppers beat farmers to the harvest.

“‘For the most part, we’re looking at less than five bushels to an acre,’ said Shelley Mills, of Valley County Extension.”

Also Thursday, Bloomberg writers Elizabeth Elkin and Michael Hirtzer reported that, “Prices for some soybean contracts are rising as storms in the Caribbean Sea threaten to disrupt the early U.S. harvest.

“Grains and oilseeds have been generally getting cheaper due to better crop prospects. But because of the storm, the nearby September contract traded in Chicago is gaining sharply against November futures, the contract that’s currently the most traded, in a move known as bull spreading.”

The Bloomberg article pointed out that, “The tropical storm is moving toward the Gulf of Mexico, and Mississippi River Delta soybeans are typically among the first to hit the U.S. market. In Louisiana, the soy harvest has already begun and was 2% complete as of Sunday, the U.S. Department of Agriculture said earlier this week.”

Friday’s Agricultural Weather Highlights report, from the USDA’s Office of the Chief Economist, stated that, “In fact, Mississippi Delta producers potentially in Ida’s path are attempting to complete storm preparations, including corn and rice harvesting, where possible.”

Meanwhile, Reuters News reported this week that, “Brazil is expected to harvest a record grain crop of 289.6 million tonnes in 2021/2022, driven by higher soybean and corn production in the season starting next month, government agency Conab said on Thursday.

“In its first forecast for the coming grain season, Conab forecast Brazil’s soybean crop will grow by 3.9% to 141.3 million tonnes and its corn output will rise 33.8% to 116.0 million tonnes.” 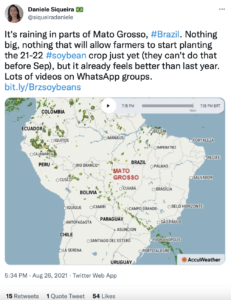 The AMS Report indicated that, “From first quarter 2021 to second quarter 2021 (quarter to quarter), costs fell for exporting U.S. soybeans through the U.S. Gulf to China and Germany. However, costs to ship soybeans from the Pacific Northwest (PNW) to China rose.”

Yesterday’s update added that, “Quarter to quarter, landed costs increased in both the United States and Brazil;” and, “Year to year, landed costs rose in both countries.”

Keith Good is the social media manager for the farmdoc project at the University of Illinois. He has previously worked for the USDA’s National Agricultural Statistics Service, and compiled the daily FarmPolicy.com News Summary from 2003-2015. He is a graduate of Purdue University (M.S.- Agricultural Economics), and Southern Illinois University School of Law.

Federal Reserve Ag Credit Surveys- 2022 Second Quarter, Farmland Values Continued to Rise
On Thursday, the Federal Reserve Banks of Chicago, Kansas City and Minneapolis released updates regarding farm income, farmland values and agricultural credit conditions from the second quarter of 2022.
U.S. Food Prices Climb Most Since 1979
Don Lee reported on the front page of today's Los Angeles Times that, "After months of steadily climbing to a 40-year high, the pace of inflation slowed notably in July…
Food Prices Soar, Up 10.4 Percent From Last Year, Biggest Jump Since 1981
Rachel Siegel reported on the front page of today's Washington Post that, "Inflation soared in June, continuing to climb at the fastest pace in 40 years across many sectors of…
Back To Top